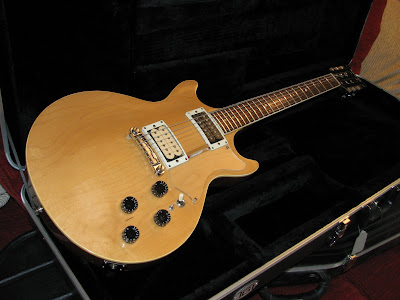 Earlier this week a very helpful and observant reader-of-the-blog left me a message to say that he'd seen a Kawai guitar in his local music shop. This is a pic of that guitar.

I phoned the shop and spoke with the very helpful owner, and the deal was done. On Friday, the guitar arrived. It's a Kawai KS-11-XL, in natural finish. A 1-piece mahogany body, 3 piece mahogany neck with a maple cap. It's in "not bad" condition for it's age. The neck pick-up is non-original, as is the bridge (though I have the original Badass bridge too). It plays brilliantly though, and the various dings and scratches are only skin-deep - the construction is still sound.

This one makes it 4 Kawais in my little family ... still interested in hearing from anyone who's got any of the KS-10, KS-11 or KS-12 models though ...
No comments:

It feels like this one has taken ages, but it's actually only a couple of months. Probably feels like longer because I've been desperate to play it!
It's finally all together, all wired, and all set-up. Thanks for assistance with the set-up go to Dr Robert (he of Guitarist magazine fame as well as many other roles!) 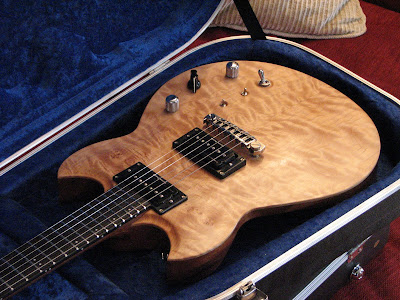 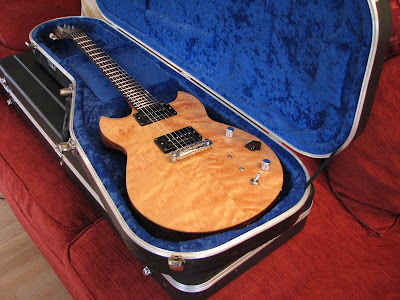 Based, not very loosely, on the Yamaha SG2000, with a couple of SD HotRails. It's a weighty guitar, and quite a chunky one too, but that all goes to add to the power of the sound.
The neck join is quite chunky too, but it doesn't stop access to the dusty end and it ensure a really good solid join between the neck and body. 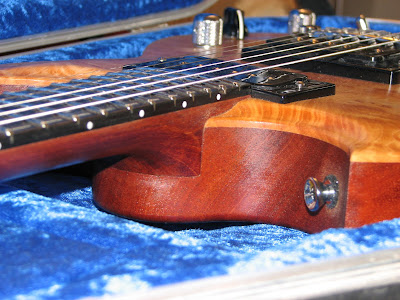 We probably spent most set-up time cutting the nut - which surprised me, as I thought I'd already done that bit of work. Well, I had done it, but not quite as well as it should be done. I also now know how to repair a cut-too-deep with a little dab of super glue.
This one is going on the "play often" pile ...
No comments:

The people at the MusicRadar forum decided to do another £100 challenge. The challenge is to spend no more than £100, take no more than 1 month, and create a guitar. That might mean modding an existing old wreck, or building something from scratch.

Last year, I built one from scratch - a Cherry Tele - but it really wasn't that good. I had decided to take it apart and scrap it (or re-use the parts in another build sometime). But then this year's challenge came along, and I thought I'd try modding my build of last year.

The progress of that build will be blogged on my other blog (strangely enough, called the £100 guitar challenge!) and I'll be doing even less here for the next few weeks.

That guitar in the last post ... is all finished now! So, I'll post some final pics soonish.
No comments: