A few weeks ago, I built a "quick Tele". It was quick partly because I used a pre-built (Warmoth) neck that I'd bought second hand. It's a great little neck. Or rather, a great *huge* neck. It was a monster, and became uncomfortable to play pretty quickly. 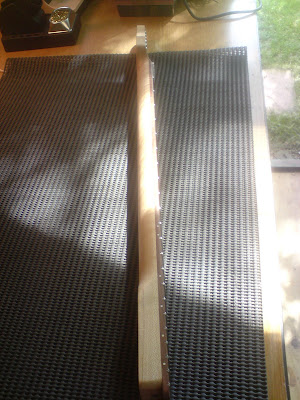 Notice the lack of any shaping between the heel and the head of the neck.

Warmoth necks are not cheap, and this was a particularly not-cheap Warmoth neck. A nice (and large) chunk of birdseye maple with a rosewood board. But, being not-cheap didn't make it any more comfortable, so I decided to attack it with the rasps ... 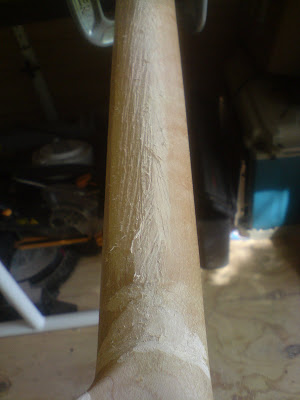 I'm always just a little "conscious" that there's a truss rod channel somewhere in there, and if I cut through to it, then the neck is ruined.
But I took 3.5mm off the thickness, reducing it from 25mm to 21.5mm along the length of the neck. and carving the transition between neck and headstock to give it some more feel. 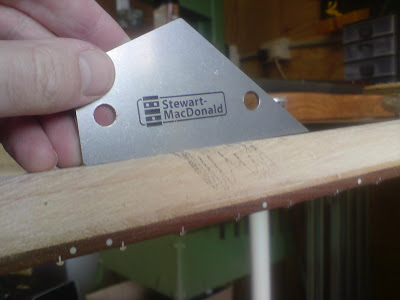 The fret-rocker came in useful for making sure that the back of the neck was straight, and that my rasping didn't leave any bumps or dents in the profile. Got that right, and then out with the sandpaper, followed by some more sandpaper, and finishing off with some more sandpaper.
It actually needs quite a bit more time of sanding, oiling and sanding and oiling (etc), but it's starting to look - and feel - a whole lot better ... 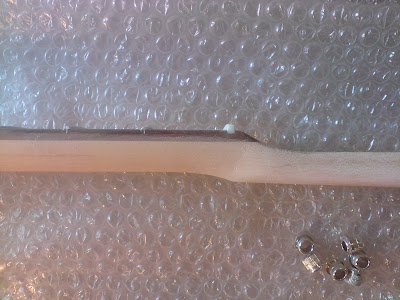 I'm qQuite pleased with that for a morning's work
No comments:

Build you own guitar fret bender

Apparently, if you try to fit fretwire into frets without bending it first, the ends have a tendency to pop out of the frets. Even when you hammer it in really hard. And then add some superglue too.

The wonderful StewMac sell a fretwire bender, to bend the straight fretwire that they also sell. But they want $90 for it. Add shipping, and then ParcelFarce and the UK customs will add their bit, so it would probably cost the best part of £100 by the time it arrived. £100 seemed like a lot for a fretbender ... but the straight fretwire really didn't work so well.

So I made one.

With a little help from a design published a projectguitar.com ... 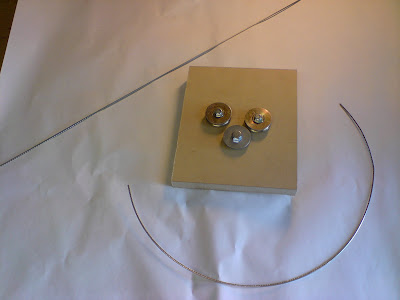 And now I can transform straight fretwire into nicely bent fretwire. One of the wheels is adjustable, which changes the degree of bend ... the first one was a little too tight, but the next lot should fit nicely into the fret slots, without too much hammering and superglue. 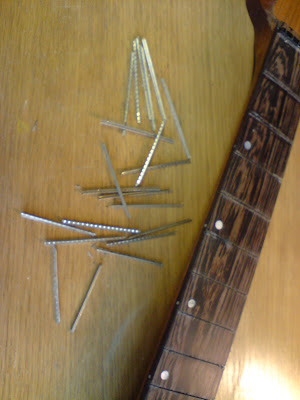 This is the first neck that I made, now de-fretted. As you can see, the frets are still pretty straight, more or less as they went in. All the hammering, clamping and supergluing didn't make a whole lot of difference. At least it was easy taking the frets out.
I'm now going to clean up the fretboard, re-profile the neck (it was a bit chunky) and then re-fret it ...
The cost of the bits came to a few ££s, so I just saved myself about £95.
And in future, my frets should stay there they need to stay without quite as much superglue.
No comments: